March 2019: Park management plans have been completed for parks in the Lillooet area. This includes Big Creek, South Chilcotin Mountains, and others. The management plans can be viewed at the BC Parks website under the relevant park name at: https://www.env.gov.bc.ca/bcparks/planning/mgmtplns/

Interview with The Georgia Straight on July 8th, 2015:https://www.straight.com/life/486916/trail-ventures-bc-invites-you-explore-southern-chilcotin-mountains-new-guidebook

June 30, 2015: Campfires banned throughout the Kamloops Fire Centre: www.bcwildfire.ca: Effective at noon on Friday, July 3, 2015, all open fires – including campfires – will be prohibited throughout the entire Kamloops Fire Centre. This prohibition will remain in place until the public is otherwise notified. A map of the area covered by this open burning prohibition and campfire ban is available online at: See a map

May 9, 2016: The Hurley River FSR is open for the season! For more info on road conditions go to: https://isurvivedthehurley.com/?p=1878

May 17, 2015: The Hurley River FSR was recently graded from one end to the other. The pass is clear of snow and overall the road is quite good. Use caution due to loose gravel/dirt.

UPDATE October 10, 2014: The road construction on the Hurley River FSR appears to be complete and the road is in good shape south of Railroad Pass. The surface is loose – drive with caution. Starting September 8, 2014, Hurley River FSR: expect two hour closures Monday-Friday, open for 10 minutes on the even hour. Recommend 4WD. Drive with caution, watch for equipment working.

August 2013:  Slim Creek FSR – road bridge near W end of road about 2 km before trailhead A has been replaced with a new road bridge and is open to traffic.

Summer 2012:  Taylor Creek Road: The very upper end of this road is no longer driveable with vehicle (reduced to track). The road is brushed in and heavily rutted. Park near trailhead J and start from here. Quads can continue along overgrown Taylor Creek Road to trailhead K.

Summer 2010:  Slim Creek FSR – bridge about 2 km before trailhead A is closed to vehicles. Park near bridge and start from here.

August 2010:  Mud Ck – Paradise Ck FSR bridges over Paradise Creek and Lindsey Creek: Both bridges on the Mud Creek -Paradise Creek FSR have been removed. There is no plan to re-install bridges at these sites. The crossings where these two road bridges were removed may be passable by horse, quad, bike or on foot – use caution. At high flow these crossings may not be possible.

November 2009: The forest fires of 2009 did affect the South Chilcotin Mountains. Within the map area, some forest in the Tyaughton Lake area was burned as well as forest to the E of Tyaughton Creek. Trail access is now back to normal.

July 1/2008: Relay Ck Rd – road work by First Nations has greatly improved this road including the wash out area and the nearby steep sidehill section. Easily 4WDable to the roads end. As usually be careful driving this slippery road when it is wet – it is recommended to carry chains for such conditions.

June 3/2007: Mud Ck FSR – some rockfall has reduced condition to 2WDHC over a few sections.

Sept. 23/2006: Relay Creek Road has been temporarily repaired. With next years spring thaw this road could be washed away again.

June 2015:  The lower Tyaughton Creek Trail  has significant blowdown between the trailhead at the Mud Creek-Paradise Creek FSR junction and the Castle Pass Trail/Route junction. Some progress has been made to date (June 15) to clear it out.

June 2015:  All creeks have very high flow. Crossings are dangerous and many are not possible at this time.

June 2013: Paradise Creek Trail/Route – as the road access has not been possible since August 2010, this trail has likely seen little use since then. Be prepared for numerous windfall from the trailhead to the first crossing of Paradise Creek – most years the trail gets cleared in the fall by hunters but windfall may accumulate from winter to fall. Desite the greater distance involved, access via the Castle Pass Trail/Route (Tyaughton Creek drainage) may be a better option.

August 1/ 2012: Taylor-Pearson Trail near Camel Pass on the Pearson Basin side – some mountain bikers are shortcutting between Camel Pass and the High Trail partially through the delicate meadows. Please stay on the trail. Do not shortcut!

August 1/ 2012: High Trail – there has been recent logging near the start of the High Trail but the trail/road is still clear.

July 1/2008: Tyoax Pass Trail – trail thin and lightly beaten now but this should change once the trail sees more horse traffic this year.

July 1/2008: Elbow Pass Trail – wet conditions with all of the melting snow but this should dry out later which about normal.

June 3/2007: Lower Tyaughton Hiker’s Trail – trail cleared out and reflagged. Several windfall across trail – detours in place around most. Some short route sections.

Sept. 23/2006: The bridge over Eldorado Creek along Gun Creek Trail has not been rebuilt yet but we have been told that construction will be started very soon.

August 6/2006: North Cinnabar Trail/Route – This trail/route was recently cleared out from trailhead to alpine meadows (although a few large windfall remain). The trail crosses North Cinnabar Creek 3 times in close proximity – look for flagging here which indicates general direction of trail. In the large meadows of the upper basin, the trail/route is overgrown – make your own route through this area (as indicated on the map).

July 7/2006: Lower Tyaughton Hiker’s Trail partially overgrown and difficult to follow. Trail Ventures BC plans to brush out and mark this trail by early summer 2007. See trip report by DougF.

June 2006: Gun Creek Trail – footbridge across Eldorado Creek washed out. BC Parks is currently working on rebuilding this bridge. It is not too difficult to cross the creek here on foot in the meantime.

To check on the status of the Hurley River FSR check www.for.gov.bc.ca.

To check on the status of Hwy (Road) 40 check www.drivebc.ca.

April 2012: The Chilliwack-Slesse Creek Forest Service Road will be re-opened for access to hikes and climbs on the west side of Slesse. The road was closed previously due to security reasons. The gate could be closed in the future for any ‘dangerous to public training’. This gate at the Chilliwack Lake Road junction is shown as permanently locked on the Chilliwack East Recreational Map, which is now not the case.

April 2012: The Chilliwack-Slesse Creek Forest Service Road is reported to be washed out near the 8 km mark and the road bridge is washed out.

July 2012: Radium Creek Suspension bridge has partially collapsed. It may be passable, but hikers will have to decide for themselves if they want to cross.

July 2018: The bridge across Seymour river is under construction:

July 2017: Repairs to Lynn Headwaters access road to start in July. For road access and parking info go to: https://www.dnv.org/news/repairs-lynn-headwaters-access-road-start-july

February 2016: The Howe Sound Crest Trail (HSCT) north of The Lions and south of Magnesia Meadows has been rerouted to go directly over ‘David Peak’ as the primary route. The “horseshoe” section of the trail which drops ~300 m into the Capilano Watershed was decommissioned by BC Parks last summer. The already existing route that goes directly over ‘David Pk’ has been formalized using BC Parks standard trail markers and is now the official alignment of the HSCT. See revised map image below:

June 2015: The gate at the trailhead for the Howe Sound Crest Trail (HSCT) is officially closed indefinitely. However, it has been noted that the gate is sometimes open. This section of the HSCT is a 4WD road. The condition of this road has degraded over the past couple of years and is now somewhat brushed-in over the majority of its lengths. The old  Deeks Creek Trail is officially closed.

Howe Sound Crest Trail: BC Parks spent $45,000 in trail work funding for the 2013 season. $50,000 will be made available in the 2014 season to continue the Howe Sound Crest Upgrade work with current focus on rebuilding the switchbacks leading to St. Marks Summit with a durable trail bed and proper drainage. Work is also planned to clear blow downs at the Deeks Lake end of the trail.

August 2014: HSCT (aka Deeks Lake Trail): At the Porteau Road trailhead (parking lot), the gate which was previously open is now closed. There are “No Trespassing” signs posted. This may be due to the housing development near Deeks Creek.

December 2014: Seymour River trail closures due to the rock slide: Bottletop, Twin Bridge, Riverside – Twin Bridge on Fisherman’s Trail are closed indefinitely. Closures are also currently in place at Hyannis Point and Incline that will likely be scaled back as we get through the rest of the next couple bouts of weather. There will be some semi-permanent or permanent changes to the trail network as a result of this slide event.

Interview with CBC News On the Coast on March 3, 2015: https://www.cbc.ca/news/canada/british-columbia/spring-hiking-trails-in-metro-vancouver-for-mountain-enthusiasts-1.2979323

May 18, 2019: The Cerise Creek trail to Keith’s Hut is closed because of damage from two massive landslides on Joffre Peak. B.C. Parks has also closed the Nlháxten/Cerise Creek Conservancy because of safety concerns. More info: https://www.cbc.ca/news/canada/british-columbia/2-massive-landslides-on-joffre-peak-change-the-face-of-backcountry-destination-1.5140856

May 21, 2018: The Lytton ferry is currently not working due to high water. To get across the Fraser River, check out this cool suspension bridge. The location of the bridge is shown on our Stein to Joffre Trail Map: https://trailventuresbc.com/stein-to-joffre-map-info/ … 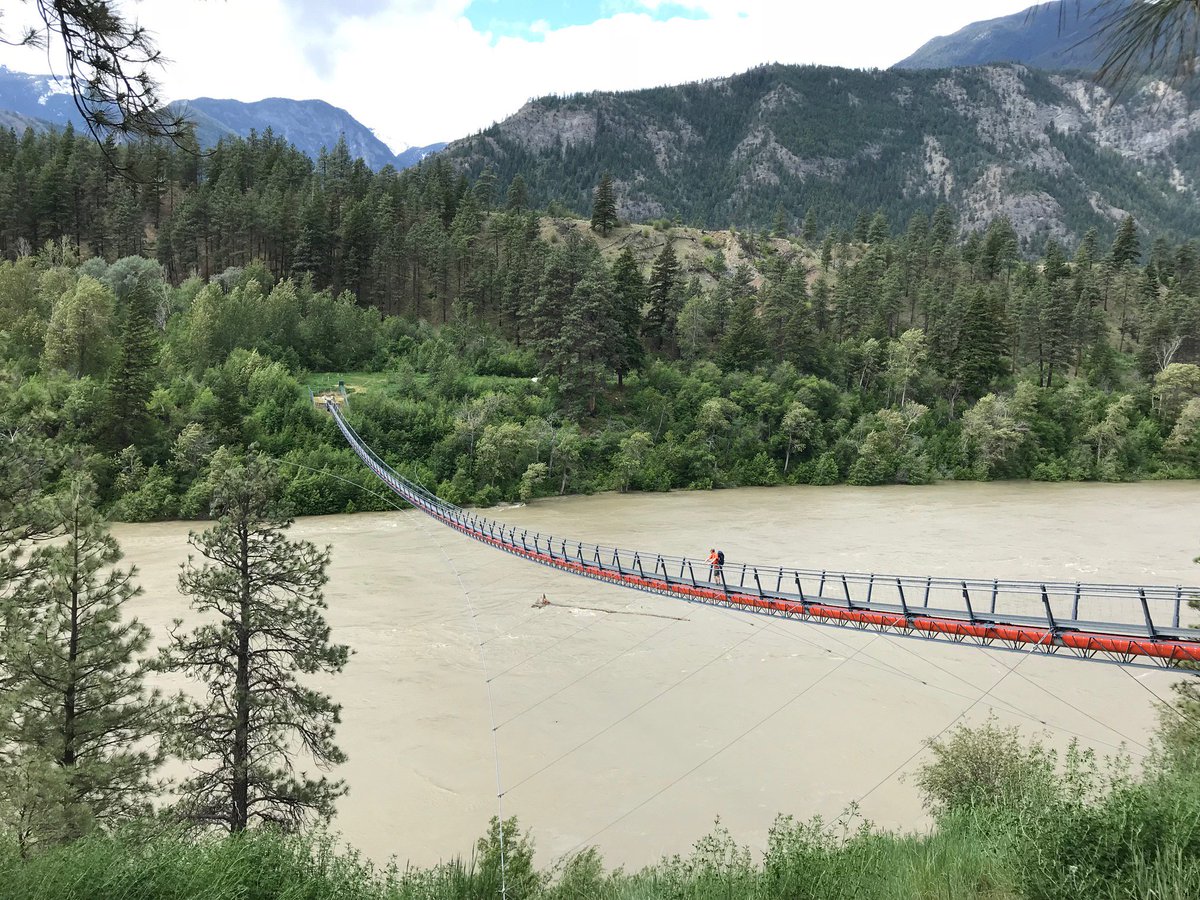 May 21, 2018: Dogs prohibited at Joffre Lakes to protect park. BC Parks: To protect the environment and wildlife at Joffre Lakes Provincial Park, dogs and other domestic pets will be prohibited as of Friday, May 18, 2018. https://www.env.gov.bc.ca/bcparks/explore/parkpgs/joffre_lks/

May 2018: Kayaking Notice posted at the Lower Stein trailhead:

July 2017: Access to Lizzie Lake Camp (Lizzie Lake Recreation Site) The 2WDHC forest service road to the new Lizzie Creek Bypass Trail trailhead has been improved over the past few years for logging and hasn’t been deactivated. Our map shows this road as 4WDHC but it currently has a rating of 2WDHC due to the improved condition. It’s a bit rough but not too steep. As of autumn 2016 it was in fairly good condition. The Sea to Sky Recreation District has asked the licensee to try to keep it maintained when they are in the area but is not actively maintaining it. The first switchback is the steepest then it gets better.
The new Lizzie Ck Bypass Trail is a little over 1 km further up the road from the old bypass trail and was completed last year. The trail network between the trailhead and Lizzie Ck Cabin was cleared out late last year. Here is a map of the Lizzie Creek Bypass Trail:

The clearing of the old road up to Lizzie Lake is also on-going. After the crossing of the ‘E Fork’ of Lizzie Ck (shown on our map) the road has been cleared out part of the way up towards Lizzie Lake. Plans are to clear out the remainder of the old road to Lizzie Lake and also to clear the Lizzie Ck Trail of the significant windfall above the lake. Hopes are to have the work noted above completed by year’s end. There are no plans to improve any of the creek crossings in this area.

0
No products in the cart.